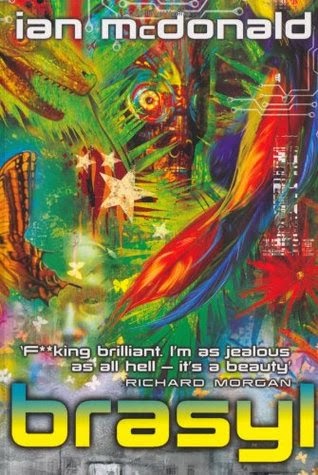 I really don't know where to start. It took me ages to finish this book and it wasn't fun.
As already mentioned in this post on a reading night I spent with Brasyl it has three different time frames which all take place in Brazil, as the book's title suggests. In 1732 a Jesuit Father Luis takes a trip up to the wilderness of the Amazonas. In 2006 TV producer Marcelina has the idea to put a disgraced football goalkeeper in a reality TV show and tries to find him. In 2032, Edson finds out about Quantum computers.
At first, the three time frames appear to be totally unrelated until it comes out that in all three people somehow find ways to communicate or even travel between multiple universes which seem to be similar in many ways but are totally different in other aspects.
The characters are all well-constructed and somehow made interesting, I suppose, but for me very unappealing. There wasn't one of the main characters I truly liked or in whose fate I was interested.
Add that to an unusual and for non-native speaker difficult language (because of complex sentence structure and a lot of Portuguese words) and you get a really tedious read.
One might say "Perhaps you didn't get it?!" and I might agree, I didn't get it or it didn't get me. There are a lot of people who totally liked the book and gave it great ratings - I can't, this book gave me nothing but a hard time reading it.