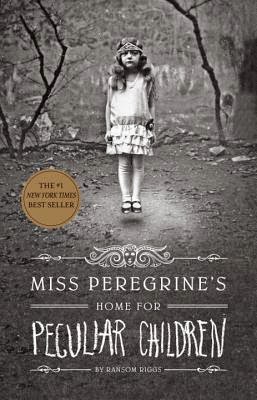 Having to spend some time and the last Swedish kronor at the airport I bought this book - Miss Peregrine's Home for Peculiar Children by Random Riggs - it was on display and on the bestseller list at the time. I immediately liked the cover and even more the design of the book. It has a lot of slightly disturbing - peculiar - historical B&W photos inside, proof of the author's hobby: He collects old and orphaned photos on flea markets.
The story is about Jacob's search for the truth behind his grandfather's mysterious stories of peculiar children with unbelievable abilities who once lived together in an orphanage. His grandfather told him these stories when Jacob was little and talked about them in his last minutes before he dies an also mysterious death. Jacob's search leads him to a little island on the coast of Wales. He finds the ruins of the orphanage and keeps exploring until he suddenly finds out that the place isn't as abandoned as it first seemed.
Ransom Riggs manages to evoke great expectations and huge curiosity what is behind the grandfather's and Jacob's story in the first part of the book. Are there really monsters? Are these kids real? Can they really fly or make fire or do they really have a second mouth in the back of the head? The photos that accompany the story work well and create a lot of the atmosphere.
The second part has a different feel to it, you get first glimpses of the fantastic reality that the author creates on that remote island.
However, it's the last part I had some problems with. Somehow it didn't feel as well-planned or believable as the first two thirds of the book. It has more action, true, it takes up speed and Jacob has to make some decisions. He finds out he is peculiar too which doesn't have that much of an impact on him as I would have expected after all the mysteries he had to solve to get there. And I still saw him as a normal boy and really his strength doesn't really serve him that well. He seems rather helpless and undecided even in the struggle of the showdown in the last chapters. That is not how I would have liked the protagonist to develop.
I also would have liked a real ending and not a giant cliffhanger... My edition even has the first few pages of the second book. But it is like that nowadays, nearly every author writes series, not stand-alone novels.
Nevertheless, I enjoyed the book quite a lot, the photos, the story and the writing.