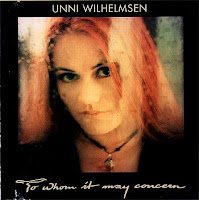 More than ten years ago a friend introduced me to a Norwegian singer/songwriter who quickly became one of my favourite artists, Unni Wilhelmsen. To Whom It May Concern was her first album and I know all the songs by heart. They spoke to me at the time and they still do. On her website she explains a lot about herself, her music and her lyrics. It somehow sums up why I like her music so much:


"I sing what I can't say. Maybe in music I find myself. I get to know me a little better for each song I write. Music plays a part in almost every aspect of my life and has done so from an early age. [...]" 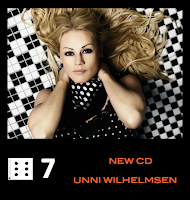 The list of musicians she mentions as her inspiration includes some very familiar names: 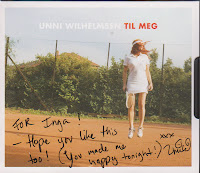 "The creative universes of Suzanne Vega, Simon & Garfunkel, Joni Mitchell, Ani DiFranco, Shawn Colvin, Nick Drake, Tori Amos, Imogen Heap and many others have enchanted me for years. I feel like I’m part of a musical inheritance that recognizes itself in their music."

Over the years I kept track of her music although Norwegian music wasn't easy to come by sometimes. After the first one only her newest album Seven was officially released in Germany. One of the seven albums is in Norwegian and it was only a few weeks ago that I could purchase it.
After all these years I finally got to listen to her live. She was on tour with Katzenjammer and Unni was the reason why I got the concert ticket in the first place. It was magic to hear her sing and also great to talk to her for a few minutes after the show. She signed my CD and was happy to meet a fan.
That I am.
von InBetween um 18:37

was that in Bielefeld? Wating at the merch stall I overheard a woman talking to Unni that she came there for her and not for Katzenjammer.

Yes, it was! I recorded 'Til Meg' (the first time in my life when I was annoyed by a glockenspiel ;) ) http://www.youtube.com/watch?v=taA5qJyt0y0