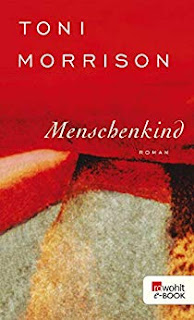 It's difficult to write about this novel.

Sethe risks her life on her way out of slavery and that of her daughter Denver who is born while she is on the run. She finds safety at the house of her mother-in-law and is allowed a short period of happiness with her four children. The catastrophe occurs when slave hunters find her and she feels forced to safe her children from captivity and violence - even if it means killing them.
So she loses one daughter, her husband never returns either. Two sons run away because the house they all live in is now haunted by the ghost of their little sister.
Sethe never copes with this loss and is devastated when a friend from her past called Paul D. comes to their house no. 124 in Bluestone Road, Cincinnati, and stirs up memories she doesn't want to be confronted with. Her remaining daughter Denver is confused by all the emerging emotions and has problems dealing with her mother's past. Things spin out of control when the ghost of the murdered daughter manifests as a young woman...

Beloved (Menschenkind) is not an easy read, narrator's perspective changes every few pages, it's often difficult to see what is real, what is a dream,... The descriptions of the cruelty that Sethe and her kin had to endure while they were enslaved are drastic at times, the impact of that cruelty on both physical and psychological levels is very vivid and emotionally unsettling. Some parts are written in a rather difficult stream of consciousness (something may have gotten lost there in translation too). Altogether it is a very impressive novel - the story, the emotions, the important historical testimony of what happened to African-Americans during slavery, the importance of finding one's identity and freedom, family bounds,... the list goes on.
This is a novel you keep thinking about for a while after finishing it.