Elizabeth George - The Edge of Nowhere 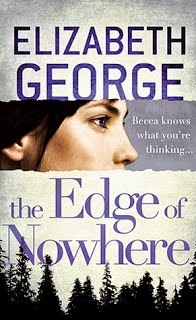 Fantasy is not the right label for The Edge of Nowhere  by Elizabeth George. The popular thriller author tries out a totally different genre, a young-adult-mystery-novel. Why now, why this genre? It couldn't probably have something to do with the huge success of other novels of this genre (e.g.Twilight or The Hunger Games)? It'll probably sell well.
But let's get to the plot:
The main character has the special gift to hear other people's thoughts. These whispers are an advantage but also a burden because she can't really cope with it. When the whispers of her stepdad reveal that he murdered someone her mother decides they have to flee. Under the name Becca King she is supposed to live with her mother's friend on a remote island. The mother's friend dies unexpectatedly and Becca is on her own. She manages to find a home and even to go to school but she never knows whom to trust. She has problems building true relationships because she continously fears for her true identity to be discovered.
When a fellow student has a major accident in the forest and lies in a coma, everyone starts to suspect things and the police starts to investigate.
As to be expected with Elizabeth George the writing of The Edge of Nowhere is okay (but not extremely well) and most of the characters are well-constructed. Sadly with a big exception:
The main character stays strangely flat, she's hard to identify with. Most of the time, George decided on a personal perspective from Beccas point of view which is more than plausible because her unique gift enables us to have an inner view of other characters too because of their whispers. But George switches the perspective to some other characters too which was rather irritating.
Only in a few moments Becca is portrayed as a real teenager, feelings of love or personal physical insecurity do come up, but seem rather inappropriate, the teenager behave like adults most of the time.
And the whispers... George does her best to mirror the abruption and incompleteness of thoughts: bits and pieces of words, incomplete sentences, sometimes combined with smells or other senses of warmth or darkness. It's possible to understand Becca's confusion.
Nonetheless it's quite strange that she stays in the dark about the feelings and motives of the people around her so completely. It's quite embarrassing considering that most of the people try to help and understand her. She shuts up when it would be better to trust people and in the later parts of the novel she bursts out all her secrets in an emotional, uncontrolled way.
You get the feeling the story is stretched out - had Becca decided to come out earlier with her story, everything could have been sorted out earlier and easier. Her actions aren't plausible, her gift obstructs her instead of helping her to better cope with people.
Looking at the plot of the boy in a coma it ends unsatisfactory, much ado about nothing, a kind of MacGuffin. But you get your cliffhanger, of course The Edge of Nowhere is only the first of the series - must be, because relating to the main problem - the dangerous stepfather - nothing has happened (in more than 400 pages or seven hours of audiobook)!
This isn't what you would call a successfull debut in this new genre for Elizabeth George.
von InBetween um 21:14