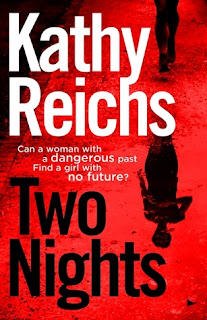 As I read everything Kathy Reichs publishes I was eager to get my hands on Two Nights. I must admit I had a difficult time getting into it. The language is special, short-sentences dialogues with sarcasm and images I wasn't familiar with in English, same with the prose of the first person narrator.
She goes by the name of Sunday Night, very intelligent, efficient but also has a damaged personality because of her past which is told parallel to the actual story.
Sunday or Sunny takes on the job of finding Opaline Drucker's granddaughter. Drucker's daughter and grandson died in a bombing years back, since then granddaughter Stella is missing and nobody knows what might have happened to her. Sunny lays out online traps to find a connection to her or her abductors and follows all the old leads. She triggers some response and only her paranoia and wariness keep her alive. It's only then that we get to know that she is not all alone although she prefers working on her own but has a twin brother named Gus - hence the title of Two Nights. Together they are successful in tracing a group of fanatics and dicovering the truth about Stella.
The plot is well-planned and the characters - especially Sunny and Gus - are interesting although I didn't really like the slightly forced parallel between Sunny's past and Stella's fate. But it was a good story, fast-paced and ending on a positive note.