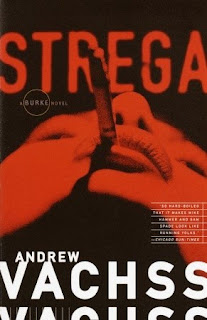 After reading Flood, Vachss' first novel about Burke, I also bought the second one, Strega, which was first published 1987. But it took me a while to actually read it.
Strega isn't any less dark or brutal than Flood. Vachss elaborates on Burke's character and life story. We get to know about his time in prison and about the contacts he made there. Some background stories of his collection of bizarre friends make them (even) more likable.
Burke's new case is simple but seems unmanageable, even for him. Strega, a woman of Italian decsent and with a very strong will, wants him to find a photo. The photo is in Burke's language "kiddie porn" and shows the child of a friend of Strega. He doesn't want this case but Strega forces it on him in a way that points directly at Burke's "weaknesses". He is very empathetic and has to fight his own fears to finally fulfill his task.
As child abuse is Vachss' main topic he illuminates  another sick aspect of it in Strega. One of Burke's leads is a rich pedophile who agrees to meet him to tell him about the wonderful love between men and boys and tries to justify this kind of "relationship". Burke reacts with total disgust and with this terrible display of the sick logic that's invented by the abusers to defend their crime against the children the whole justification is dismissed.
Apart from all the darkness of the story and the topic it was a very good read, well-written, a thrilling plot and great characters.
von InBetween um 20:46