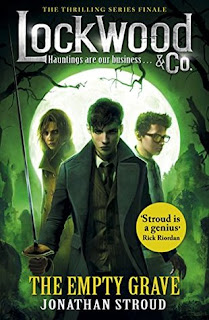 With The Empty Grave Jonathan Stroud's amazing series about Lockwood & Co. comes to an end. I really enjoyed all five books and fancy the ghost world and the great characters Stroud created here. But I am also quite happy with this being the finale. So many YA and fantasy series lack good plots and a plan on how to bring the story to a good, suitable and satisfying ending.
After discovering some disturbing new aspect of the Problem in book four, The Creeping Shadow, Lockwood and Co. (now consisting of Lookwood, George, Lucy and Holly plus Flo and Kipps as an addition) is determined to figure out where the growing numbers of ghosts come from and who might be responsible for it. Each of them uses their strengths to add pieces to the puzzle. Also the skull, Lucy's rude but funny ghost companion in a jar since The Whispering Skull (book two), takes on an important part in their final mission. As usual there are some minor ghost hunts and problems to be solved in the beginning- Stroud loves to warm up his audience. The plot develops quickly and the finale has some surprises and a great showdown with lots of action. After that Stroud makes sure to answer remaining questions - not everything is solved or well - but he manages leave the characters in a state of content and hope and maybe even happiness. As for the fate of the skull - this is the one you might fantasize about... next to Lucy he has been my favourite character of the series. Again, I think Jonathan Stroud did a great job with this fifth and final Lockwood book and I am really eager to know what his next project might be.