One of the first books I downloaded on my new kindle was Twain's Tom Sawyer (maybe inspired by a postcrossing card I got in May 2011). I have always wanted to read some of the classic American and English literature - in fact it was one of the reasons why I bought the kindle, so many free e-books to choose from! 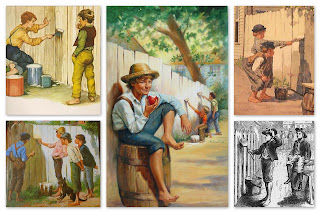 It was fun to read Tom Sawyer, the language (and slang) of 1876's Missouri was a challenge in some parts (but not a problem thanks to helpful kindle context dictionary - great feature!) but the story still works and pulled me into Tom's world immediately. Just one example: What an ingenious idea to make painting look like the greatest thing in the world so everyone wants to do the job Tom is supposed to do as a punishment!
Here are two quotes from chapter two:

Tom appeared on the sidewalk with a bucket of whitewash and a long-handled brush. He surveyed the fence, and all gladness left him and a deep melancholy settled down upon his spirit. Thirty yards of board fence nine feet high. Life to him seemed hollow, and existence but a burden.

He had discovered a great law of human action, without knowing it — namely, that in order to make a man or a boy covet a thing, it is only necessary to make the thing difficult to obtain.