Somehow I had totally missed out on Sandra Bullock winning an Academy Award as Best Actress in 2010. In The Blind Side (2009) she plays the role of Leigh Anne Tuohy, a rich woman who takes a big black kid, Michael Oher (Quinton Aaron), into her home and family. Michael is shy and obviously traumatized and has problems at school, because he's never had a proper education before. But he's very talented with ball games and because of his size he's an ideal American Football player. Leigh Anne helps him to become a real member of the family and with his grades and her son S.J. (Jae Head - well done!) helps him with his training and his understanding of football. The movie closes with Michael Oher beginning his career with the Baltimore Ravens in the National Football League (NFL). 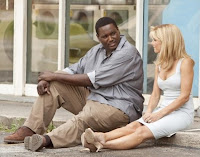 The movie is based on Michael Oher's real life story and although football is an essential part of the movie it's not a real sports film. Apart from Michael it focuses on the personal decisions of Leigh Anne who is brave enough to take in a black kid from the wrong side of town. Bullock plays the role amazingly (although it took some time to getting used to her blondness), bringing me to tears more than once and as many times making me laugh out loud. It's emotional, it's kind and it shows us how privileged we are for having clothes, food and a bed - and people who love and protect us.