In 2009 Dan Brown's third novel involving Robert Langdon was published and immediately it was a bestseller in several countries. Although I liked Angels & Demons (2000) and The Da Vinci Code (2003) I was slightly disappointed by his other novels - maybe that's why it took me until now to read The Lost Symbol.
Under false pretenses Robert Langdon is coaxed to Washington D.C. to give a lecture in the Capitol. A villain called Mal'akh needs Langdon's help in finding the Lost Word. The Lost Word is a well-kept secret by the Freemasons - only to be found with the help of the Mason's Pyramid, an object with a lot of hidden messages. To ensure Langdon will help him Mal'akh has kidnapped Peter Salomon, Langdon's mentor and a 33rd degree mason. Of course the Freemasons, Peter's sister Katherine Salomon and the CIA have their interests in the consequent events.
In short, the usual hunt from one piece of the puzzle to the next starts, Langdon finds help and obstacles along the way until the final showdown.
On the one hand it is another page turner, the reader is eager to know what will happen next, how they gonna escape this time and what is the solution of the puzzle.
On the other hand The Lost Symbol is clunky and constructed. All this knowledge, all the symbolism, all the double layers to everything, the quotes... It's not always fun to read, more like a lecture. And some of the turns were even obvious.
And in The Lost Symbol, the secrets are not as fascinating as the ones in the other two novels. Of course, here we find mysticism and masonry in the very deep foundation of the USA, but it is not really appalling, is it? Not to me apparently.
There were a few quotes I liked but all in all I wouldn't put this book on my favorite thriller list. Here's one quote which Dan Brown copied from the Masonry bible - figures!
Time is a river, and books are boats. Many volumes start down that stream, only to be wrecked and lost beyond recall in its sands. Only a few, a very few, endure the testings of time and live to bless the ages following. 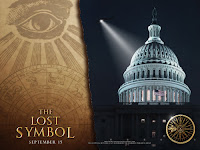