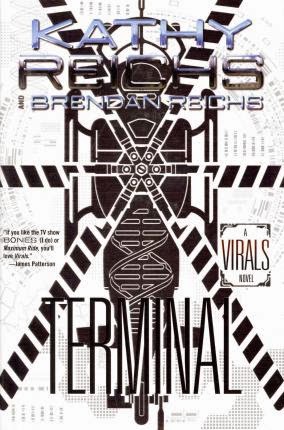 In Terminal, the fifth book of the series by Kathy Reichs and her son Brendan, Tory and her pack of Virals are challenged by a rivalling pack, the Trinity. In addition to that, they are threatened by a group of suspicious men in black who try to capture the Virals several times. Meanwhile they are trying to figure out who the members of the Trinity are. Chance Claybourne - who was the Virals’ enemy before - claims to be helping them now. He is also infected with the same virus that created the Trinity. So Chance is right in the middle of everything including Tory’s confused feelings for him and her packmate Ben.
The characters and their dialogues are as good as ever although Tory’s confusion whether she loves Ben or Chance is a bit annoying. The plot appears to be a bit forced; the Virals get trapped and act dumb in more than one situation – something that didn’t happen in the earlier cases. But in order to construct plausible opponents they apparently have to act naïve for a while, otherwise the Trinity wouldn’t stand a chance.  Same criticism applies to the places of the story which don’t really fit the teenage setting and remind us of James Bond or other action films. Everything seems a bit out of scale and overdone. And although the authors try hard to make the ending scientifically plausible it is not. It works to bring the loose ends to a closure – Terminal being supposedly the last book of the series – but it is not really satisfying.
Although as a fan I liked the book because I love the setting and the characters it had some weaknesses in storytelling and plausibility.