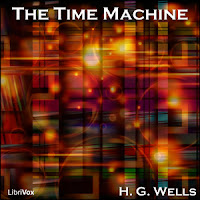 H.G. Wells' (1866-1945) classic novella The Time Machine (1895) was the first science fiction story that mentioned a device with which one can travel through time. In fact, he coined the phrase for all other time travellers' stories.
The story is not too complicated: The protagonist, a Victorian English scientist, tells his guests at a dinner party that a) time is the fourth dimension and b) he invented a device with which he can travel through time. He also tries to prove his theory with a smaller prototype of this device which disappears from a table.
A week later he arrives disheveledly in front of his guests and tells the story of his time travel from which he has just returned. On his own recount, he went to the year A.D. 802,701. He found two different kinds of creatures there, the small and peaceful Elois and the frightening Morlocks. While the Elois live happily above ground and seem to be content with a very simple life, the Morlocks exist underground and only come out in the darkness and apparently feed on the Elois although they also seem to work to keep them carefree.
The Morlocks had taken the time traveller's machine and he had to fight to get it back. After several adventures and a somehow romantic relationship with one of the Eloi he suceeded and was able to return home after some more time travelling into the far future of the earth.
His dinner guests aren't sure whether to believe him. One of them returns on the next day only to witness the time traveller disapperaring with his machine - never to come back.

Apart from the fascinating idea of the time machine, H.G. Wells' readers might have been interested to read about his time traveller's theories on how the Elois and the Morlocks descended from the present humans in the 19th century. As a socialist, these theories had to do with industrialism, capitalism and the working class. Though things have definitely changed since Wells' times, the gap between rich and poor couldn't be greater which is why The Time Machine - apart from being an important story in the development of science fiction literature - is still a valuable read and rightly a classic.

I enjoyed listening to this librivox recording of the story - I like to thank all the volunteers who put a lot of time and effort into recording these audiobooks.