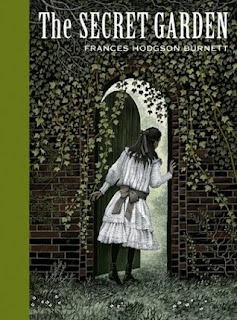 Mary Lennox is a spoiled and unhappy child who noone seems to care about and whose been looked after by servants all her life. After her parents died she has to leave India and live with her uncle in Yorkshire. This uncle is unhappy too after his wife died ten years ago and he doesn't even want to meet Mary, he doesn't seem to care about anything and is away most of the time.

So Mary is mostly left alone to discover the secrets of her new home: There's the closed-up garden that's noone has seen in ten years and there's a mysterious crying in the house which the servants don't want to talk about. Feeling a bit lonely she seeks the friendship of the housemaid Martha, her brother Dickon, the gardener and even a little robin. With the help of these friends she's able to help somebody else in desperate need of company and friendship...

I read this beautiful Sterling Classics edition of The Secret garden which has some beautiful illustrations by Scott McKowen combined with listening to the free librivox audiobook by Karen Savage. A lot of the direct speech in this book is written in Yorkshire dialect and for a non-native speaker it is sometimes hard to decipher. Karen Savage did a wonderful job in reading this and it made it so much easier.

For me, one of the most interesting aspects of the story was the focus on the positive effects of belief: It doesn't matter if you believe in magic, God or any other natural force - as long as you believe that something good will happen, that things will turn out for the better, then you - or nature - may overcome all crisis. The main characters pratice this positivity in repeating the things they want to happen over and over again. "I'm going to live forever and ever and ever!"
I also liked that the two main characters (Mary and Colin) weren't all that likable at the beginning. Although they lived in wealth and were well-cared for by servants they weren't happy at all. In fact, they both had very undesirable character traits because nobody cared to guide them and show them how to treat people, how to be empathic or modest or even friendly. The positive role models are of course there in the characters of Martha or Dickon, both from poor families but raised by a loving and caring mother (who is actually also responsible for getting Colin's father back...). These characters are - as Cedric in The Little Lord Fauntleroy - to good to be true but Mary and Colin desperately need them for guidance. They can only start to thrive when they are cared for and even more when they start to care for others - either for the plants in the garden or for each other.
This may be a simple message but it still works. I also liked the admiration and respect for all things that grow in this book - all of these aspects made it very enjoyable.