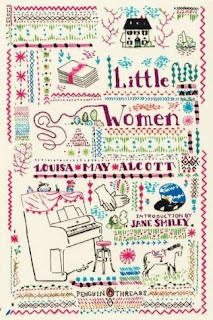 Louisa May Alcott's Little Women is a classic I had intended to read for quite some time. I own two editions of it, one of the Sterling Classic series with lovely illustrations from 2004 and a Penguin Threads edition from 2007 with a stunning cover and lovely paper. I chose to read the Penguin edition while simultaneously listening to the audiobook by Bertz + Fischer from 2010, read by Laural Merlington.

The story is about the four March sisters living and growing up in New England during the Civil War. It was published in 1868 and an immediate success. Jo, Beth, Meg and Amy represent different kinds of characters and each of them has to find their own way in life, often challenged by fate and struggling with their own personal and social expectations. They long for their personal happiness, freedom and success and have to walk different paths to get there.
The novel is full of cultural, historical and literary references which are explained a little in the Penguin edition. It is also a real mirror what life was like for women at the time in America. Although at the end the girls get married it is not at all the way one would have expected at the time. Jo refuses to marry first and finds another unconventional husband who is not at all the romantic ideal believed in by young girls at the time. Also the girls get to think and feel on their own, realizing that there are other, more important things than financial well-being which made the novel quite influencial in the 19th century.

I liked the story and the characters, not only the girls but also the other characters such a Professor Bhaer, Marmee or Aunt March, and the audiobook was read excellently. 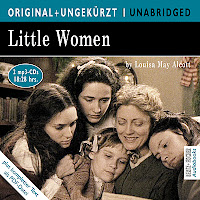 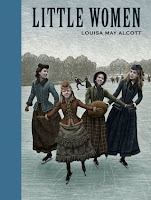