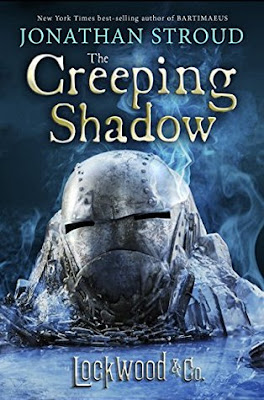 Lucy Carlyle had left Lockwood & Co. in a hurry at the end of book three of the series (The Hollow Boy). Now she is a freelance agent and with the help of the skull (which we know from The Whispering Skull and who is a ghost in a jar whom Lucy can talk to) and her extraordinary listening skills she is quite successful. But one day Lockwood himself pays a visit and asks her for a help on an important case - and Lucy can't say no. She joins him, George and Holly and it is obvious that they are a great team together. Penelope Fittes, the leader of the giant Fittes Agency, is quite happy about the good results and wants them to join their agency. But Lockwood wouldn't be Lockwood if he didn't sense something suspicious and declines the offer.
Meanwhile Lucy finds out that some of the sources (the objects that link ghosts to this world) aren't destroyed as they are supposed to but gathered by some powerful collector. Soon she is targeted as a thread and of course she goes looking for help at Lockwood & Co. To escape the situation in London and investigate the somehow involved Rotwell agency they travel to Aldbury Castle, a village that recently experienced an enormous uprising of ghosts and where one suspicious Rotwell institution is located.
As ususal, the group heads straight into trouble - and discovers some very disturbing new information on the ghost problem. The ending includes another cliff hanger (but not as "bad" as the last one) so there's another book in the series to look forward too.
I totally enjoyed The Creeping Shadow. Lucy is as strong a narrator and main character as ever, decisive and more confident. Holly's character gets more depth which was necessary, additionally Stroud adds an adult to the group (Kipp) who serves well for some comical remarks and adds another perspective. The plot - although starting slow as usual with some minor ghost hunt - develops logically and takes on momentum quickly. Stroud obviously put some thought into how to explain the ghostly world some more which keeps and even increases the incentive of the series. Well done, Jonathan Stroud!