Anthony Doerr - All the Light We Cannot See 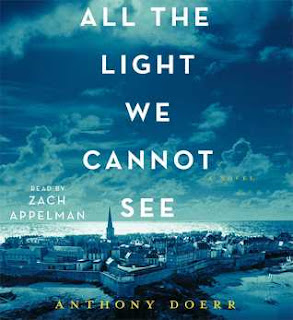 All the Light We Cannot See by Anthony Doerr won the Pulitzer Price for Fiction (and several other prices) in 2015. It tells the story of the two main characters Marie-Laure Leblanc and Werner Pfennig mainly during WWII.

Marie-Laure Leblanc is the blind daughter of the master locksmith at the Museum of Natural History in Paris. When the Germans are about to invade they flee to her uncle in Saint-Malo.
Werner Pfennig is an orphan in a German mining town and has a special talent for radios and science in general. Therefor he is recruted by the Nazis for a special education but of course has to serve in the war later on. At the end he is sent to Saint-Malo to find the location of a radio transmitter of the French resistance - which is run by Marie-Laure and her uncle.
The story is told in very short chapters and alternates not only between the two characters but switches between the time of the final battle of Saint-Malo and all the events leading to the two characters being there.

Of course both are deeply influenced by the war but the author makes sure that the story and the characters are not portrayed in black and white but with a lot of greys: They are unsure of themselves, they doubt their own actions, they have complicated emotional states and they change during the story. Both are very likeable and the reader wishes the author would have given them more time together but they meet only very shortly. This and the overall ending of the book is a bit frustrating for me because the story leading to these final events is quite long although well-told and well-written. I simply would have wished for more...
I understand why the novel was successful and why it won prices but apparently it didn't move me as much as it did many other readers but I liked it a lot. Maybe the English audiobook wasn't the best choice because the German names and terms were a bit strange to listen to in Zach Appelman's pronunciation.

Anthony Doerr, All the Light We Cannot See. Simon Schuster 2014.