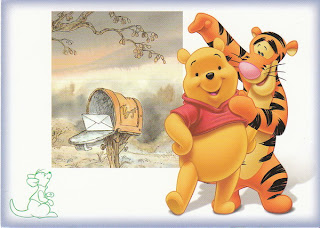 "Well," said Pooh, "what I like best-" and then he had to stop and think.
Because although Eating Honey was a very good thing to do,
there was a moment just before you began to eat it
which was better than when you were,
but he didn't know what it was called.
A. A. Milne: The House at Pooh Corner, Chapter Ten. (1928)
postcrossing card by Elodie, France, 16th October
von InBetween um 20:58