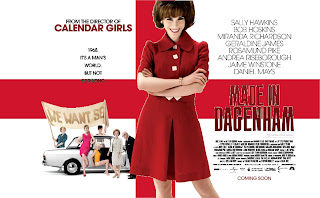 Made in Dagenham (2010, published in Germany under the irritating title of We want Sex - see banner on picture for explanation, the complete one said sex equality...) is a film by British director Nigel Cole (Saving Grace/Grasgeflüster, 2000).

It deals with the female Ford employees (responsible for sewing car seats) going on strike after being told that their work was in the less-skilled category so they would receive less pay. They demanded equal pay because male workers were given more money for a less skilled job. This Ford sewing machinists strike of 1968 led to a standstill in car production when they ran out of car seats. Finally the strike leaders negotiated with Barbara Castle, the Secretary of State for Employment and Productivity under Prime Minister Harold Wilson. After an immediate pay rise the Equal Pay Act was established in 1970.

Although the film invented the leading role of Rita as spokeswoman of the strikers and changed a few details of the historical events the film gives a good impression of the way women's work was regarded at the time and what an immense turmoil this strike must have caused in the men's world. I especially liked the aspects of the film that showed what additional struggle working women had to endure in their private homes, the expectations of men how women should function at home although working full hours like themselves and how slowly these things change.

I didn't know before that the laws that try to ensure equal pay in most countries of the world had their beginning in this one factory in Dagenham. It's bitter though that equal pay still isn't the reality.