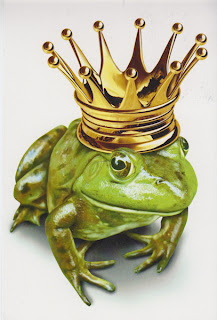 Postcrossing card from Russia by Lidia, referring to the fairytale of the Frog Prince. It reminded me of Peter Gabriel's song Kiss That Frog (from the album Us, 1992).
I liked the album a lot at the time, but if I listen to the lyrics of Kiss That Frog today, I know that I missed out on some of the ambiguous meaning then. Or, come to think of it, it's not ambiguous, it's really quite distinct:

By the way, the video won the award for "Best Special Effects" at the MTV Video Music Awards in 1994.