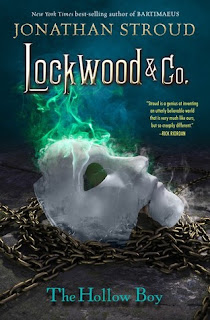 In this third book of Jonathan Stroud's series about the small "Psychic Detection Agency" Lockwood & Co" Lockwood, George and Lucy feel a bit left out because they aren't hired to help solving the mystery of the big ghost outbreak that haunts Chelsea. Lockwood, being his formidable self, then forces himself into the investigation while Lucy struggles with her growing talent to communicate with ghosts that puts her repeatedly in danger. And if this hadn't enough potential for a fully packed plot Stroud also throws in a new character. Lockwood hires Holly Monroe to help organize their chaotic office and home although she isn't really of much help in the field. Having a second woman in the team immediately puts Lucy on edge which isn't helpful for keeping her emotions in control.

Although The Hollow Boy takes a few turns in the first that don't seem all that necessary for the main plot Stroud does a good job in showing us the development of Lucy's character. She is way the most interesting of the three and she is a tough heroine for a change, compared to all the lame excuses of female protagonists out there. That's why I'm a bit put off by Stroud's decision to make her that jealous of Holly. Even Lucy as a narrator has to admit that Holly does a good job in organizing their terrible household and does a lot of good for the company but freaks out nonetheless because she feels her relationship to Lockwood threatened. There are so many other important things going on (her ability to hear and feel what the ghosts want and talk to them) so I don't understand why she has to behave that much teenager-like in her crush on Lockwood who repeatedly ignores her and even ignores her abilities.
Apart from that the book was mostly fast-paced, action-filled and fun to read. (Major cliffhanger there at the end, of course, I hope Stroud is a fast writer.)