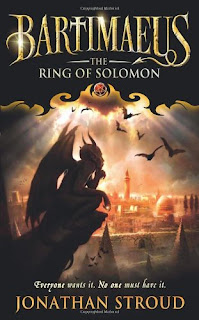 I thoroughly enjoyed Jonathan Stroud's Trilogy about Bartimaeus, an astonishing spirit, conjured by demoniac magicians to do their bidding. Bartimaeus gets caught in the humans world and involved in their affairs although always longing to return to the Other Place where spirits live. He never gets tired of telling his listeners/readers what a great and ancient spirit he is and what great things he's done. Never lacking a bit of self-irony in all the bragging.
The Ring of Salomon takes us back in time and to Jerusalem where with the help of a magical ring King Salomon reigns over profane humans, magicians and spirits alike. The ring gives its owner nearly absolute power because it enslaves the most powerful magical being.
When in Salomon's name the Queen of Sheba is blackmailed into paying tribute she sends an assassin girl - Asmira - to stop him, kill him and get the ring. A hopeless task - but it isn't if Bartimaeus is around. He - as usual - gets caught in the middle of trouble and - as usual - saves the day. But how ... I won't tell.
First I had difficulties to re-enter Bartimaeus' world and style - maybe it was the ancient setting, maybe it was because events started slowly. Nevertheless, Bartimaeus is a great character, fun to be with and altogether an enjoyable read including laughter and the right tension.