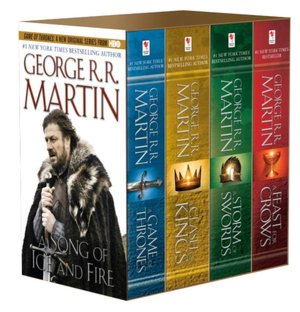 I like a fantasy novel from time to time. I'd heard of Georg R.R. Martin (just the name) and then the kindle shop offered a bundle of the first four novels a while ago. Took me until this summer holidays to start reading on them and I finished A Game of Thrones just now.
After some time of getting used to style and characters I started to like it: Martin has chosen a medieval setting and a fantasy world with only some differences to the real world. Apart from e.g. dragons and direwolfs most of the characters are human. I liked the different perspectives of the characters, in A Game of Thrones it's mainly different members of the Stark family, so their experiences add up nicely for an overall impression of their family and fate.
I won't go into the story much further (read up plot summaries on wikipedia if you like). I was more or less surprised when the first volume ended - because it feels more like it just started! This is a common "problem" of fantasy series - so much to tell, so many different angles, a lot to explain about the world in which all this is happening. So when the reader is finally ready to comprehend names and places the first 500 pages are already gone!
I'm looking forward to reading the next parts of the story though I need to take a break now. Martin's style has some lengths so it consumes a lot of time (maybe even more so because I read slower in English, naturally) - and I want to catch up on some of the other books on hold.