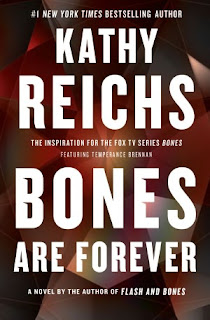 As a fan of Kathy Reichs' books and the TV series Bones there is no escaping reading all her novels. So here's the new Tempe Brennan novel (no 15 of the series) titled Bones are Forever, published a few weeks ago. German translations isn't available yet so I got this one as an English e-book. The predecessor was Flash and Bones (Fahr zur Hölle, 2011) which I liked although it wasn't amazing.
In Bones are Forever three dead, in part mummified babies are discovered in Montreal. Their supposed mother/murderer is missing. This quickly leads Tempe and Ryan (still very painfully not together) to the very north of Canada to Yellowknife. The story develops around prostitution and drugs but also around gold and diamond mining.
There's very little of Tempe Brennans original line of work in the story, it's not a lot about bones at all but she's investigating - alone which as usual brings her into trouble.
Apart from still liking Reichs' style of writing I didn't like the story so much. It appears to be done quick and dirty - which is somehow proven by Kathy Reichs' own explanation in the epilogue where she compairs writing with fixing a big pot of soup throwing in a lot of ingredients here and there then stirring up the whole thing.
Bones are Forever works okay, but again as in Flash and Bones it has the need to do a lot of explaining at the end after the showdown to fix the loose ends. I also don't like protagonists having sudden inspirations to solve the case - flashes inside her brain, in her unconscious mind, or by her id (as Reichs put it herself).
Altogether I enjoyed reading - the language was at times challenging for me, some really colloquial bits and unusual imagery - but I guess writing TV scripts has somehow influenced not only Reichs'  language but also her other writing in regard to pace and style of storytelling.