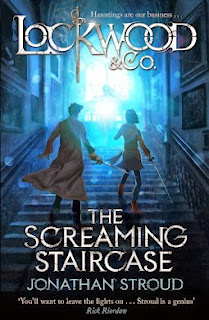 Ever since reading the first book of the Bartimaeus series I'm a fan of Jonathan Stroud's writing. Even if some of his other, earlier novels (e.g. The Heroes of the Valley) have proven not to be as good as Bartimaeus. It was no question that I'd read his new series Lockwood & Co.
As in Bartimaeus Stroud constructs a new reality based on the real thing. The story is set in London but since some decades now the city and the whole country is haunted. There are ghosts everywhere and apart from being scary they are also quite dangerous, you can die from being "ghost-touched". Stroud does a great job in describing the atmosphere and the rules of this alternative society.
There are bigger and smaller agencies that can be hired to get rid of the unwanted visitors, with iron, silver and rapiers the youn agents (only the young can really see, hear and feel properly) fight the ghosts and destroy their sources - usually an object connected to their untimely death.
The smallest agency is Lockwood & Co. with only three members, all young, no adult supervisors. One night something goes wrong and in defending their lives they burn down their costumer's house. To pay their debt they only have one chance - to conquer one of Britain's most haunted houses and solve the mystery of The Screaming Staircase.
Stroud tells the story through the eyes of the talented young agent Lucy who just joined Lockwood & Co. She isn't fully aware of all her skills, there's more to explore for sure in the books to come.
All three main characters are likable but not perfect, they're young, they make mistakes - which leaves plenty of room for younger readers to identify with them.

The story takes some unexpected turns, Stroud speeds things up, slows them down again, including some cliffhangers when doing a flashback to explain the background story - it's hard to put the book down because you desperately want to know how the story turns out.
I thoroughly enjoyed reading it, I liked the idea of this haunted society, I liked the characters and the plot was mostly well-designed. I'm looking forward to the next book of the series.