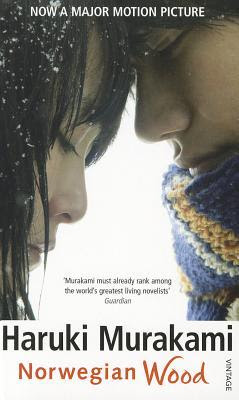 Murakami's Norwegian Wood is a quiet, slow-paced but intense novel. It is a love story set in Tokyo in the late 60s. Toru is a quiet student and in love with Naoko who he knows from back home. She was the girlfriend of Toru's best friend who committed suicide. The two are deeply connected but before their love can truly grow Naoko's mental illness forces her to seek refuge in a special institution. While she is away Toru meets another girl named Midori who also has a lot of problems but who is much more lively and open to the world than Naoko could ever be. Toru is confused and unsure what to do...

It is mainly a coming-of-age story with Toru having to decide what kind of man he wants to be. He spends a lot of time reflecting himself and his situation. Although he meets people and loves some of them he seems to be isolated in his contemplation of his purpose in life. In addition to this he has to suffer losses which make him drift away even further. He comes close to his breaking point but manages to live on - how his life developed from there on we don't know.
I liked the characters, some of the dialogues where really fun and the Japanese setting was interesting to me. I felt I only could read a few pages and then had to stop because of the sadness and intensity. It is definitely no light read but it made an impression and I liked it.