Every year soon after Christmas I see the first tulips at the florists' and I'm equally disturbed by it as by the sudden apperance of "Spekulatius" (almond cookies) and gingerbread in stores in September. It feels too early, it doesn't feel right. Winter hasn't even started yet but they want us to buy spring flowers? Why?
I want to leave this dark and grey season behind as much as anyone else but some tulips won't make spring.
Sometimes postcrossing cards make you explore the strangest things so I know now that there are 109 species of tulips and they were brought to Europe in the 16th century. There even was a tulip mania in the 17th century when tulip bulbs were sold for immense prices. Interestingly, the wikipedia article states that the

Something to think about a bit more. 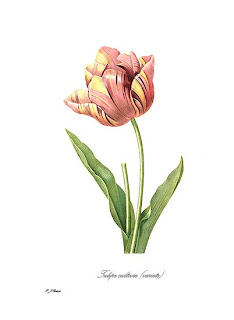