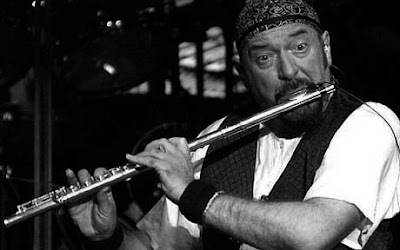 For a long time now I enjoyed the music of Jethro Tull, of course especially Ian Anderson's flute. He's an extraordinary flautist - he's got a unique style and is an amazing improviser. So there wasn't much to think about when I found out Jethro Tull were playing in Paderborn.
The location - well - not so amazing but the band didn't seem to mind and made it a great show.
Ian Anderson had experienced some voice problems years ago which is why he had an additional singer who also made it possible for Ian to play his flute more - to my delight.
The concept of the tour is to play both parts of Thick as a Brick, the first from 1972, the second from 2012, plus some additional songs.


"This tour will feature a more theatrical production with video, additional musicians and a troupe of dancing elephants. (Just kidding about the dancing elephants: they don't dance.,...)"
- quote from jethrotull.com.

The quote mirrors Ian's special humour, very dark, bizarre at times, the albums were greatly staged with video sequences, costumes and acting of the band members.
Ian's voice surely has its limits nowadays (the guy was born in 1947!) but he's energetic and surely a professional and gifted musician on stage. I enjoyed every minute, every song of the concert which lasted way more than two hours and featured my truly loved Jethro Tull highlights Bourrée and Locomotive Breath - the last one in a literally breathtaking version as the last song of the evening. 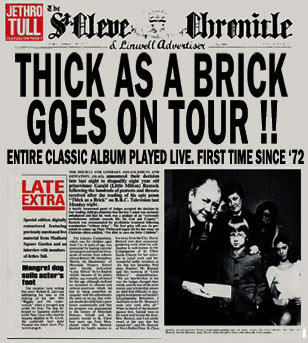