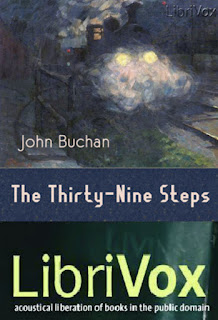 John Buchan’s story The Thirty-Nine Steps was first published as a serial in a magazine in 1915.

It is about Richard Hannay who has previously lived in Rhodesia and is now bored with his life in London. When a strange American spy named Scudder seeks refuge in his flat he listens to his story and wants to help him. Without having learned much about the details he finds Scudder murdered in his flat a few days later. He fears to be the next victim of Scudder’s enemies or at least to be arrested for his murder by Scotland Yard he flees but takes Scudder’s encoded notebook with him.

What follows is an unlikely road movie with Hannay being on the run from a group of German spies and the British police. The adventure includes several stolen and borrowed vehicles who get destroyed in the process, changing of clothes with more or less strangers and lots of helpful people who Hannay tells some fairytales or bits and pieces of the real  story. There even is a bomb explosion.

It is only after he returns to London that he understands the full meaning of Scudder’s notes. He reveals an imposter at an important political meeting but the imposter flees and surely wants to escape from Britain to bring his information to the Germans. Hannay figures out the meaning of the mentioning of the thirty-nine steps and is able to stop the Germans.

Wikipedia calls John Buchan’s book an adventure novel and surely Hannay experiences quite a few adventures on his trip. The basic plot about an innocent man escaping his enemies and triumphing at the end was copied several times – influenced of course by the popular film by Alfred Hitchcock.

I am not extraordinarily impressed by the story but I can see why this particular kind of plot became popular therefor I am happy to have finally read it.