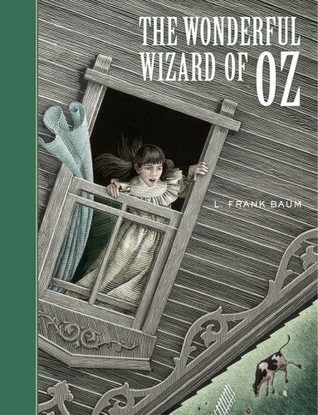 Among the classics that I still have to read was also The Wonderful Wizard of Oz. It is constantly quoted in more or less obvious ways that I thougt it useful to know the original. My edition is a beautiful linen hardcover with lovely illustrations by Scott McKowen from Sterling Publishing, NY. It is part of their Children's Classics series.

In the author's introduction L. Frank Baum references the classic fairy tales of Grimm and Anderson and sets his book apart from that tradition as he wants to present a new type of "modernized fairy tales", written "solely to pleasure children of today". He wrote the introduction in 1900. Nevertheless you get some typical fairy tale elements: There are classic magical creatures like the witches and wizards, talking animals, a long journey, difficult tasks to do, magical spells, repeating things three times and of course the happy ending. But he adds modern elements as the Scarecrow or the Tin Woodman and the characters are more complex than the average fairy tale person. He also mentions real locations (e.g. Kansas prairies) and other typical American elements which is why The Wonderful Wizard of Oz is often called the first American fairy tale. It had a great cultural impact on literature, music and film and as so many classics was critically discussed, praised and banned in equal measures (to get an impression you may read the wikipedia article).

I liked the setting of the story, the many countries the main characters' journey leads them to were rich in ideas. It triggered my imagination about the wonderful colours, nature and people in these lands which is more than a normal fairy tale does. I am not that fond of the characters and their wishes because it is totally apparent that the Scarecrow, the Tin Woodman and the Lion don't need the things they wish for because they already possess them - I guess even children are aware of that in an instant. The Wonderful Wizard of course is a great disappointment and his actions are disappointing too. So what's the message there? You shouldn't believe in mighty helpers to solve your problems? You're on your own? Or - in a more positive way - only rely on your friends? I'm not sure.
But overall I liked the story and can understand why it influenced a lot of other artists' work.