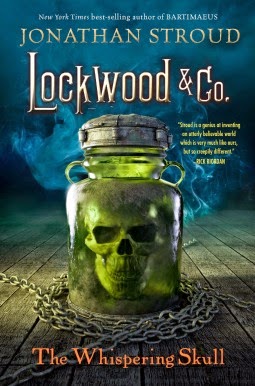 Amazing cover art for a great second book in Jonathan Stroud's new series about Lockwood & Co. The Whispering Skull plays an important role in the agency's new case:
Anthony, Lucy and George are called to Kensal Green cemetary to help with the excavation of Edmund Bickerstaff, a Victorian doctor. Suffice it to say, he wasn't one of the good guys but instead is said to have tried to get into contact with ghosts and the other side. And of course there is more than just a corpse to it and they not only recover his bones in an iron coffin but also a strange object, a bone mirror, apparently a strong source of ghostly energy.
The story takes up speed when that object gets stolen and the officials at DEPRAC want Lockwood and Co. but also their rivals from the big Fittes Agency to retrieve it. So it's not only a matter of good research and bravery but also a matter of honour to be successful in this case. But there are some obstacles they can't overcome all by themselves...
As to be expected in a second book, we see some character development:
Lockwood himself appears to be invincible at first but shows first signs of opening up towards the end (resulting in a good cliffhanger for book three, by the way).
George (for me the least likable of the three) is unlucky because his strength to get deeply involved with a problem or a mystery becomes a weakness and he is in danger of loosing track and himself.
Lucy's skills to communicate with ghosts/visitors grow and so she is the one in touch with the whispering skull who tries to lure her on the wrong path. But her self-reflection helps her to realise when her emotions get the better of her (especially regarding her relationship with Lockwood) and she resists the skull's attempts to use her for his own interests.
Stroud's writing style is great - for kids and adult readers alike - giving enough details and having the right balance between fast-paced action and taking time to explain and reflect. He also carries his ideas of a haunted London further, creating new aspects of this fictional reality and introducing and developing some new characters. Well done.
I totally enjoyed reading it, feeling a bit sorry to finishing it so soon because it means I'll have to wait quite a while until book three.