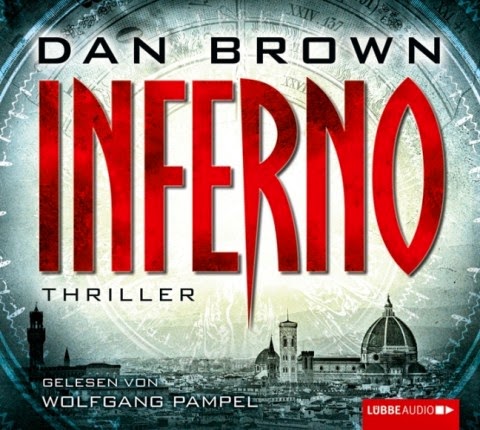 Inferno is the fourth novel of the Robert Langdon series. While I appreciated the first two, I was skeptical about number three, The Lost Symbol (2009). I've got a similar - or even worse - impression of Inferno.
Langdon wakes up at an Italian hospital and he is told he has been shot and suffered a head injury which explains his memory loss. Apparently his enemies are still after him, soon he has to flee the hospital with a female doctor called Sienna and figure out what is happening to him. This is where the typical hunt and riddle solving starts, this time it is all about Dante Alighieri, the author of the Devine Comedy. Reason for the hunt is a viral thread to humanity caused by a half-mad scientist who is already dead. Of course he has left clues where the epidemic will start with a dubious company which then has its own interests to stop Langdon or the epidemic, or both... Their motives change. Sienna also isn't who she seems to be, or is she?!
Some of Dan Brown's twist and turns in Inferno don't really work that well and seem overly constructed. Langdon's expertise on the matter (Dante's work, life and symbolism) isn't as important as in Angels and Demons (2000) or The Da Vinci Code (2003) and way less logical. You can't really belive that Dan Brown claims to have researched more than three years for the novel. Nevertheless, it is fast-paced and not a total bore. What I disliked totally is the ending, it isn't an ending at all, the story just ends without any conclusion or a final statement, Langdon simply goes home.
It was a good idea to listen to the audiobook otherwise it would probably have taken me ages to finish it with a lot more frustration throughout the process.