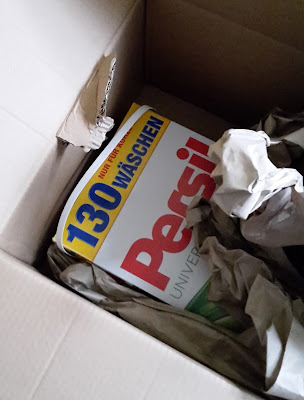 When my last bread machine broke down after many many breads I wanted a new one for sure. I did what one ususally does, read some tests, compared features and prices, read some reviews. Then I tried to buy one in local stores and it wasn't possible to find a store who had the one I wanted. So I finally decided to order it online because I didn't want to wait any longer. It didn't take long to ship it and the packet arrived shortly and as planned. But when I opened it I found this - a big heavy packet of washing powder!
Parcel number and address were correct, but I won't be baking any bread today!
I'm a bit annoyed because I have to send the washing powder back and wait a few more days for the bread machine but I guess this happens if there are thousands and thousands of packets packed every day.
I'm wondering now... is whoever ordered the washing powder now the lucky owner of my bread machine?

Email ThisBlogThis!Share to TwitterShare to FacebookShare to Pinterest
Labels: Unkategorisches