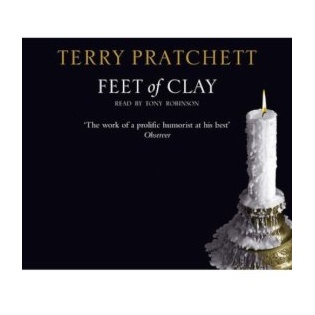 Feet of Clay is the third Discworld novel about the city watch by Terry Pratchett. It was originally published in 1996.
The golems of the city create themselves a king and put all their hopes into him - literally writing them down and putting them into his head. He tries to follow their orders but is unable to function properly and ends up committing crimes that the city watch has to investigate. The main characters Commander Vimes and Captain Carrot, Angua, Nobby Nobs and other city watch favourites. They also get a new forensics expert, the female dwarf Cheery Littlebottom who is responsible for some really funny scenes and dialogues.
Feet of Clay is an enjoyable novel which raises the interesting question what makes a person a person and what does it take to grant him equal rights in a society.
Tony Robinson is an amazing reader and he does a really great job impersonating all these challenging characters.