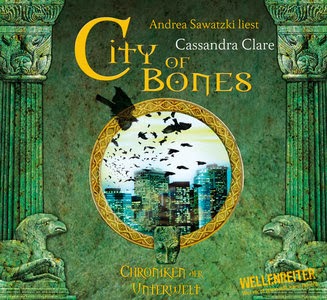 City of Bones by Cassandra Clare is the first book of the "Mortal Instruments" series. As one who is interested in Young Adult/Fantasy books it seemed logical to read this popular and bestselling book.
Clary Fray is 15 years old and lives in New York with her mum. In a club she first gets in contact with a totally different world when she witnesses a murder and has to realize that nobody else can see the murderers or the victim! She soon learns that the "murderers " are shadowhunters whose job it is to hunt down demons, so they aren't the bad guys. She apparently has some talent for the job because she can see demons and shadowhunters and discovers that her family is deeply involved in this other dark world. Things are getting really complicated when Clarys mum disappears and it becomes obvious that there isn't just good and bad guys and you can't be sure who is on the good or bad side.
I won't waste a lot of time pointing out the many good or greater stories Cassandra Clare obviously borrowed/copied from, she's a known fan-fiction-writer and a lot of reviews say that she didn't overcome this aspect. It may altogether not be a very original story.
What I didn't like about City of Bones was the storytelling. The characters remained somehow flat although you get to know background knowledge but usually somebody tells you about the difficult family situation or the history of him or her. It's a not very not subtle, sometimes even too direct - it takes all the fun out of getting to know the characters and figuring them out. Same happens with the story itself: Clary's life is turned upside down in an instant but she just walks on, accepts it, behaves as if she'd always known this. If possible she is even a worse female main character than Bella from Twilight... Altogether unbelievable and clumsy storytelling with annoying characters.
I guess I won't waste any more time reading some book by Cassandra Clare.