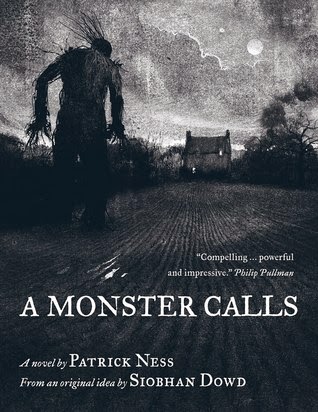 Patrick Ness’ A Monster Calls is a special book in many ways.

It’s not every day that an author gets asked to write a book based on the idea of another author. After Siobhan Dowd died Ness got the offer to use her idea, he was hesitant at first but the story already had sprung to life and he had to write it. At least so he tells us in the author’s note at the beginning of the book.

And a good job he did. The basic real-life story is simple: Conor has got a very sick mum who is not getting better but getting worse. Nobody really talks about it and Conor feels helpless and angry. He keeps having nightmares but one night a monster comes to his window. Although scary and very dark the monster doesn’t harm him but tells him stories – stories in which the people who seem bad turn out being not so bad after all and the other way round. Nothing is only black and white especially when it comes to people.  As it turns out Conor is in desperate need to learn that lesson, to accept his own inner fears and anger … and grief.

I guess you’re not human if this book doesn’t bring you to tears at least once. Conor is struggling and it is unfair but it is life. And life goes on even if it’s hard sometimes. So the book is consoling too.

And it’s exceptionally beautiful. Jim Kay did the illustrations and they create a lot of the book’s atmosphere. They are dark and scary – monstrous – but there’s light and beauty in them too. It’s a book you can enjoy page by page, story and pictures, and it’s a book you can reread several times and finding different small wisdoms between the pages every time.