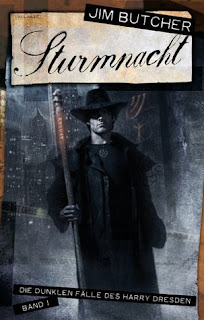 Jim Butcher writes what is called urban fantasy, a genre which isn't my typical playing field. The main character of the series is called Harry Dresden and he's a magician. In this first book, Storm Front, we learn a lot about the setting of the series, its world and main character.
Dresden does investigative work, similar to a private detective, with a little bit of magic on top - because weird things are happening in Chicago...
In Storm Front the police seeks Dresden's help in a double murder case, apparently the victims' hearts have been ripped out of their living bodies! Soon Dresden finds himself caught in the middle between drug lords, demons and the accusation that he himself could be the murderer. In addition to that he has to fight the temptation to use the dark side of magic to fulfill his goals - which would be terribly wrong, of course - but he resists and with some luck solves the case and saves the city and himself.
The novel has a dark but humorous atmosphere (even in the German translation which I read), Harry Dresden could become an interesting character but in Storm Front he is clearly in his early stages and has still to be developed. It was an interesting and entertaining read although I'm not sure I really like the genre enough to continue with the series. I'll probably try one in English next.