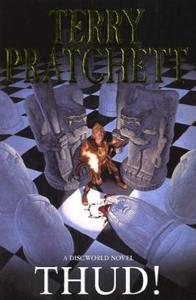 That's the sound of a club hitting a helmet (or a troll's head).
And the name of a game with counters representing dwarfs and trolls.
And the title of this novel by Terry Pratchett.

A long time ago dwarfs and trolls fought a serious battle in Koom Valley. Nobody knows who started it, nobody really knows who won. When a dwarf gets murdered in Ankh-Morpork shortly before the anniversary of the battle, Commander Sam Vimes of the City Watch is going to see it fought again. There are a lot of difficulties to solving this murder and some of the clues are buried deep.

This novel contains everything a good Pratchett novel needs:
Beloved, tough characters with a great sense of humour leading to witty dialogues.
A plot with suspense, riddles and mystery.
An issue with a direct connection to our world, something to think about, something to take with us beyond the mere enjoyment of reading.

In Thud! the issue is nothing less than racism, even within the City Watch noone is safe from having prejudices and fear: trolls, werewolves, dwarfs, vampires and humans. It's complicated and simple at the same time. Even Sam Vimes has to struggle with his own rage, for he is "infected" with a dark entitiy...
Big parts of the story work as a metaphor if you want to read it like that. Or you can just sit back and enjoy all the fun parts and the magic of the story.With Pratchett, you usually get both.