Mary Shelleys Frankenstein or the Modern Prometheus was one of the classics I only had a vague idea what it is about. I knew that Frankenstein is always mistaken for the "monster" but is its creator. I had no clue that Shelley intertwined so many layers of narratives in this book.
First there is Captain Walton who gives a quite lengthy introduction how it happened that he's able to tell us this extraordinary tale in his letters to his sister. He leads an expedition to the North Pole (I guess that normal for the 18th century when the story is set) and rescues Victor Frankenstein from his immanent death on the ice.
Frankenstein then tells his life story (including his family and friends) until his studies in Ingolfstadt lead him to the creation of a human-like creature. He wanted it to be beautiful but fails and created a monster whose appearance scares everyone.
Then it is the monster's turn to explain his experiences in life as he tells them Frankenstein who gives a detailed recount of this to Captain Walton before continuing the story from his own point of view.
The story is rounded up by Walton telling us about Frankenstein's death and his final moments with the monster. 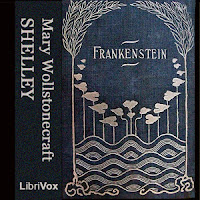 I listened to the librivox audiobook read by Caden Vaughn Clegg who did an excellent job interpreting the different voices including the monster's part. The structure as mentioned above made listening a bit confusing at the beginning but got better when the actual story (creation of and conflict with the monster) started. There was a lot of emotions of anger, hate, pity and lust for revenge going on, on both sides and lenthy descriptions of how better a person other characters are (e.g. the victims William, Justine, Henry or Elizabeth) and how desperate and flawed Frankenstein sees himself compared to all these other people. While on the other hand Captain Walton sees Frankenstein as an amazing person (why that is I didn't get, because he seems more or less crazy or at least depressive most of the time). I kept wondering if Shelley accidentally wrote a psychological novel instead of the intended ghost story (a bet with other writers). Is there really a monster? Is it the manifestation of his mental illness? But I'm sure somebody has already written a clever paper about that...

It's good to know the original story now, I'm impressed by Shelley's construction of the novel and it is great that a woman of that period has influenced so many horror or scifi stories. A true classic that deserves the term.